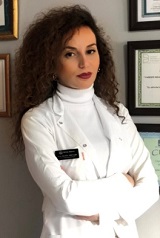 Title: A Three-Step Intervention To Deal With Emotional, Cognition And Interaction Difficulties in Autism

Autism spectrum disorders are considered neurodevelopmental disorders that affect cognition, interaction, socialization and behavior. Because the emotional state of parents is important in the development of the child, we have researched emotional and psychological trauma before and during pregnancy in mothers who have children with autism spectrum disorders. We have seen that most of the mothers participating in this study have gone through significant trauma during pregnancy. We have also researched the emotional and psychological state of both parents in the postpartum period and during the growth of the child! In addition to parents in this study we also included children with autism of participating parents.Giving importance to specific individual intervention, we have built a therapeutic program called "three-step intervention" which is built based on the personal characteristics and needs of each child with a focus on anxiety treatment, cognitive stimulation and support with supplements depending on cognitive difficulties, and stimulating interaction. After the completion of the first phase of this therapeutic intervention, we have seen significant changes in the emotional state of the Parents and especially noticeable progress in children in cognition and interaction, changes which we have seen to be stable over time.